ProTren Probiotics is a professional-strength probiotic product line used by BioCorrect Nutrition to help our clients with digestive issues.  ProTren specializes in manufacturing the highest pharmaceutical-grade quality probiotic supplements, setting a global standard of excellence in the dietary supplements industry.

Natasha Trenev introduced the term “probiotics” to the United States when she immigrated here in 1954.  She and her company support scientific research throughout the world demonstrating the health benefits of their chosen bacteria strains. 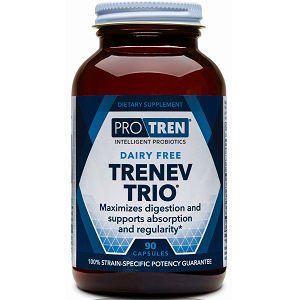 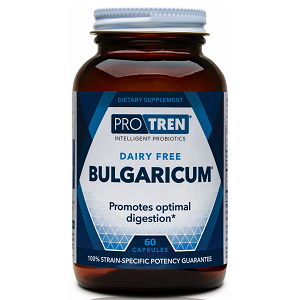 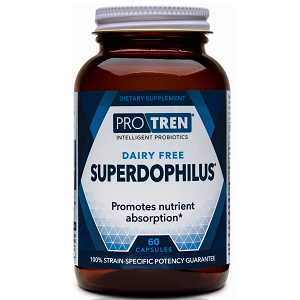 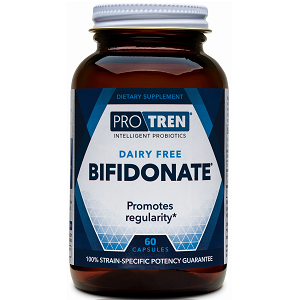 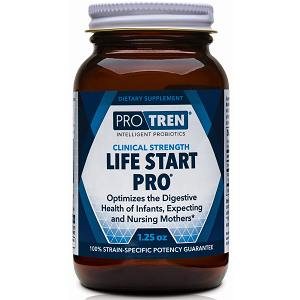 Leadership, Quality, Viability and Scientific Support.  There’s a lot of hype from companies about numbers of different bacteria strains provided and who has more CFU’s in every capsule.  When it comes to better health, simple is almost always best.

It’s a fact, probiotic bacteria strains don’t play nice with each other.  They fight each other for dominance as they colonize in the intestines.  Until one strain wins the dominance battle, the battle can cause gas and digestive distress.  Fewer strains that colonize best in different locations in the digestive tract keep things simple and effective. 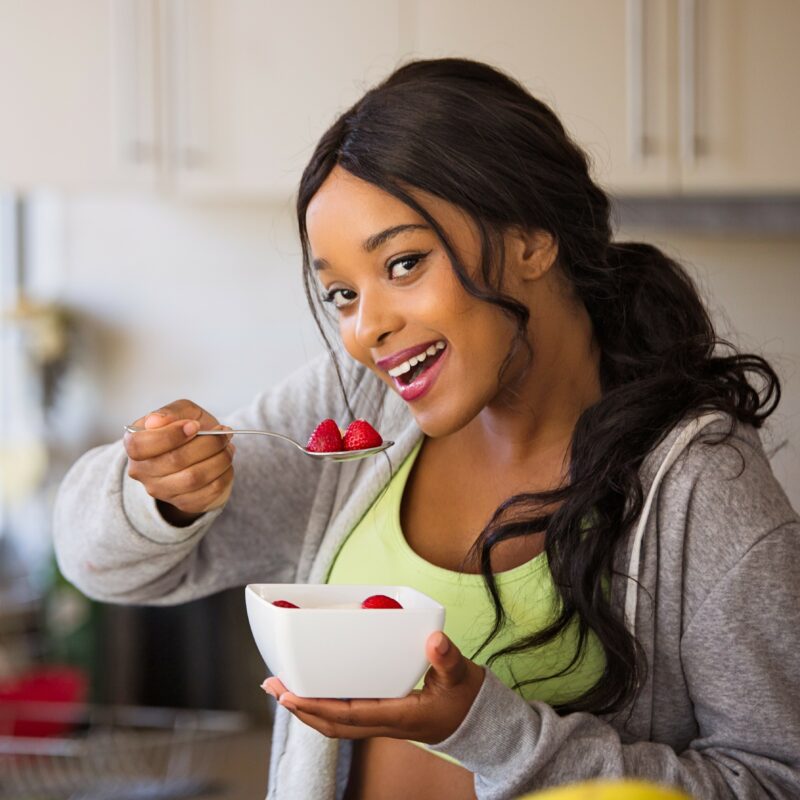 ProTren focuses on three probiotic bacteria strains, all super strains chosen for their key properties.  One that colonizes best in the upper or small intestine (Lactobacillus acidophilus).  One that works best as food passes along the intestinal tract (Lactobacillus bulgaricus).   Finally, one that colonizes best in the large intestines (colon) and finishes the digestive and elimination process (Bifidobacterium bifidum).

A forth strain only offered as a single strain formulation, Bifidobacterium infantis, is the predominant probiotic strain in healthy infants.  It’s thought to have co-evolved with humans because of its unique ability to digest human breast milk oligosaccharides.  It can be helpful for colicky infants with gas and gastric distress.

The good news is these single probiotic strains once established, fight against pathogenic flora, yeast and fungus that cause health issues.  ProTren offers single strain probiotic options to selectively address individual regions of the digestive tract, and the 3-in-1 Trenev Trio which delivers the three key bacteria strains together to colonize separately along the digestive tract.

The Trenev Process® is a unique proprietary technology that ensures unmatched survivability and stability of the live probiotic bacteria. This cutting-edge technology uses an oil-matrix system to micro-enrobe the beneficial bacteria keeping them separated, non-competitive and virtually 100% protected from the stomach’s gastric juices.

Bacteria are commonly antagonistic and will fight for survival, therefore multi-strain probiotic products must be created in a way that maintains the separation of each individual strain. ProTren mixes together a maximum of only three organisms and uses this unique oil-matrix technology to keep them separate and non-competitive. 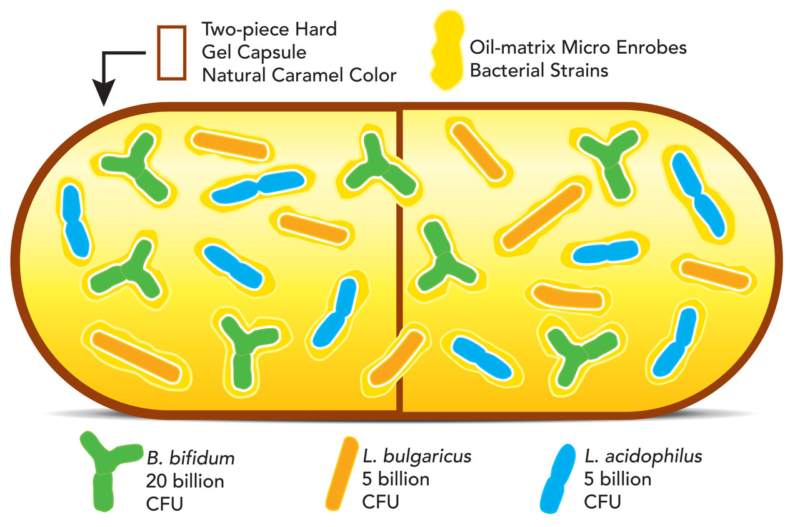 In addition to protecting the bacterial strains from one another, the oil-matrix also protects the live bacteria during their passage through the acidic stomach. This survivability has been validated through third-party testing by an internationally acclaimed European institute at pH 1.8 for 60-90 minutes. The protective oil-matrix delivery system results in virtually 100% survivability, for over an hour in corrosive stomach acid, of the three probiotic bacteria found in ProTren’s Trenev Trio and additional protection is provided by the two-piece hard gelatin capsule.

Every ProTren Probiotic order is shipped directly from ProTren using their Thermally Controlled Custom Shipping process to guarantee 100% potency of each probiotic strain through the printed expiration date.  Note: there is a $12.95 cold packaging container and shipping fee for every order.

This is the amazing 3-in-1 Trenev Trio probiotic in its proprietary oil-matrix system.

It is our most potent probiotic – contains a minimum 30 billion of three potent, super strains of beneficial bacteria that work in combination to aid your digestion!  The proprietary oil-matrix system protects bacteria viability as it passes through the stomach acid to colonize in your intestines.

Each capsule provides a minimum of:

Natren’s Lactobacillus bulgaricus LB-51 super strain is a transient bacteria that travels through the digestive tract with food as it is being processed by the body.

Each serving of BULGARICUM (either 1/2 tsp. (1 gram) powder or one capsule) provides a minimum of 2 billion cfu of Lactobacillus bulgaricus LB-51 transient super strain.

Recommended for adults and children over two years of age.

ProTren BIFIDONATE powders and capsules are the most important beneficial bacteria for human health, according to Japanese research.

Don’t let a sluggish colon make you miserable.  Residues and wastes can build up in the colon.  BIFIDONATE can help keep your colon in perfect working order.

Recommended for adults and children over two years of age.

ProTren SUPERDOPHILUS powders and capsules are the natural way to maintain a healthy intestinal flora no matter what season of the year.

ProTren SUPERDOPHILUS also aids in digestion and absorption.  It is also a resident organism in the oral cavity, the vaginal tract and part of the urinary system.

Appropriate for vegans and recommended for adults and children over two years of age.

B. infantis is the predominant gut bacteria in healthy, breast-fed infants.

B. infantis is one of the most predominant bacteria found in the gut of healthy, full-term, breastfed infants.  B. infantis was recently named the ‘champion colonizer of the infant gut’ by researchers at U.C. Davis because of its unique ability to digest human breast milk oligosaccharides.  In a 1980 German study, B. infantis was the predominant beneficial bacteria found in infants.  Alarmingly, since that time, researchers have found a decline in the numbers of B. infantis found in infants, including breast-fed infants.

BioCorrect Nutrition strives to provide our clients the Best-of-the-Best in quality, service and scientific support of our methods and recommendations.  Below is a synopsis of scientific studies, research and explanations of how probiotic bacteria support better health.

Join our mailing list to receive the latest news and updates from our team.  We will keep you informed with healthy tips and product news from BioCorrect Nutrition.  And we promise not to sell your information.  That would be rude!

You have Successfully Subscribed!